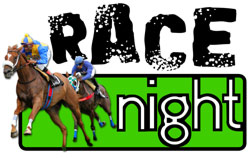 A race night usually consists of between six and nine races each with eight horses. The first five to eight are normal races where you would be expected to sell each of the horses in each race to an owner prior to the race night. The owner names the horse and would get a prize if their horse wins the race. The last race is an auction race where each horse is sold to the highest bidder on the night, with a large cash prize given to the winning owner of this race.

The normal running order for a night would be:

Short Interval with Stand Up bingo

Followed by the raffle & any other auction items.  NB. These should happen after the race night and would normally use an alternative PA system such as an in-house or DJ system.

Top Tip: A good way to finish your event is to do ‘Nearest the bottle’. Get a large bottle of spirits and encourage your guests to throw £1 coins at it, nearest wins. It’s a good way to mop up the final few pounds.

Every race has the same format:

This site uses Akismet to reduce spam. Learn how your comment data is processed.